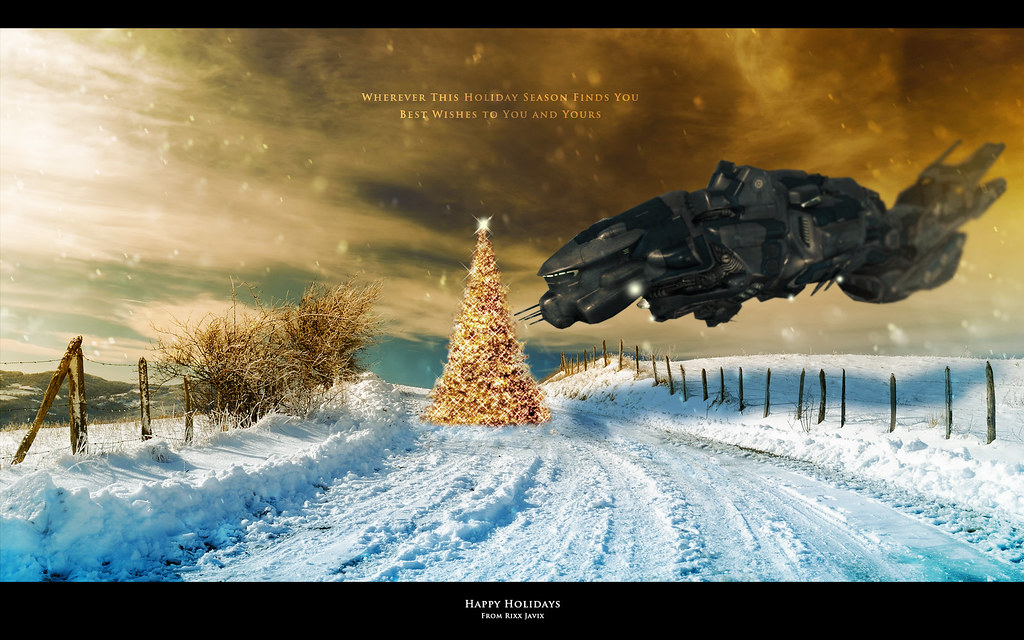 Mike sipped his spiced tea and looked out at the night sky from the front porch of the lodge the family had rented for the holidays.  He thought back and tried to remember when they had celebrated in a house and shook his head.  Tanta always loved the season and invited everyone she could to come celebrate.  Family, friends, students current and past, all might come to share in the event.

A lot of the cooking was done by family, each taking turns in the kitchen and turning out a meal, snacks, cookies (Mikes favourite to make)((and eat)).  Those who did not earn a spot in the kitchen helped in other ways, decorations, cleaning, various events and games  . . . the things that tied an extended family together.  They might visit the nearby city and the students would put on a dance recital for a church, hospital, or jail.  (In the last case Ruis or one of the other younger men or women would accompany and keep a firm eye out for anything untoward.)  Tanta was charitable but not foolish.

Free had arrived with her tech, Cory, and was absorbed into the hustle and bustle until she too was part of the family.  She picked up where she left off training the young ladies who might want to defend themselves better and Cory made himself handy wiring and recording and keeping things running smoothly for the touring shows.

The mealtimes were noisy and raucous and almost always delicious.  For Mike and his extended family  the holidays were almost a month long event and while he occasionally left to do his Bus runs he tried to be present as often as possible.  Just because he was there less than usual did not mean that he did not pay attention, though.

The tea had almost cooled to that perfect temperature and he stared up at stars wondering how many of them he had visited.  He heard the door close behind him but no footsteps of a person moving closer.  He smiled “So, what brings you out here, Free?”

“Yeah, A lack of data sometimes means something as well.  Just because you are not told something does not mean you will not hear it.  How bad is she?”

The long pause confirmed his fears.  ‘They do not know for sure.  But how do you know it is anything at all?”

Mike blinked back tears, still trying to focus on the stars but now they were balls of light, not points.  “A few of the new faces . . . I was not introduced which is odd, so I ran face searches.  Doctors and nurses.  If it was something simple that money could fix then I would be in the loop.  If it was something that required a donor then you would be out on the hunt for a donor,  voluntary or otherwise.  As we are both here . . .”  He shrugged, spilling  a bit of the tea.  Cursing softly he set the cup down and wished for something a bit stronger than tea.

Free handed him the bottle.  “Rum?”

Mike took the bottle and sipped from it slowly, then passed it back.  ‘Thank you.  Has she been making a lot of excuses and reasons for you to be around, lately?”

She stepped up to stand beside him and nodded.

Mike smiled.  “So she decided, then.”

“Decided what?”  Free asked.  At times talking to Mike was difficult as his mind kept jumping subjects.  It all connected, for him, but there were a lot of steps skipped.

Mike shrugged again, “Not my place to say, yet, not my place.  But I am glad Cory could make it.  He seems to fit in nicely.”  He blinked and wiped at his eyes.  “I spent billions over the last month and yet if I could help her . . . if my money could do anything.”

Free laid a hand on his arm and said softer than she had ever spoken before.  “She knows.”

Mike snorted, “Of course she knows, she be Tanta.  And she ain’t dead, yet, she ain’t.  Come on, let’s go inside before they start another round of rumours about you and me.”  He took the bottle back, had a larger swig and gave the stars one last loving look before leading Free back into the noise of the house party.

A small scare before Christmas.  My mother had a few ‘small heart attacks’.  She is fine now (after surgery) but I consider it a shot across the family bows.

CCP once had roadmaps . . . we could see the general path that they had in mind.Now I feel like we just hop from one thought to the next but never see the steps between.  As a former teacher I used to insist that you show your work.

I hope the holidays were good for you and yours.  One of my promises to myself is to write a bit more.  Mainly Eve but a bit of Elder Scrolls will pop up from time to time.